From MMNet Wiki
Jump to navigation Jump to search 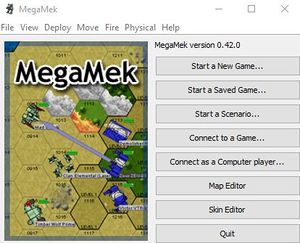 MegaMek is an open-source Java program that simulates the BattleTech board game as close as possible. While not officially supported or licensed, the game nonetheless faithfully recreates Classic Battletech with many options for players to choose from, from optional rules to hundreds of different mechs (called Meks in MegaMek to skirt around licensing issues), tanks, infantry and more. MegaMek features a variety of ways that two or more players can battle. Server hosting is the most common, where one player will connect directly to the other.

The Megamek interface allows for a game to be set up with player(s) choosing from a variety units to make up their army. The admin can also change various settings and optional rule sets in this menu. After this step, the game is launched and players can use the main window and secondary windows to play as normal. For a detailed walkthrough of the UI, see the Interface page.

The game uses Classic BattleTech rules at it's core and there's no need for dice, models or map boards. The game's engine does all the calculating when it comes to rolling dice, LoS (Line of Sight) calculations and more. MegaMek comes preloaded with a range of maps already, with built-in random map-generation tools as well. A map editor and skin editor, for customizing the look of all of your unit's is also included.

Playing against a computer opponent is also possible within MegaMek. While obviously no where near as challenging as playing a human opponent, the AI is a great place for new players to start in order to learn the BattleTech or to learn their way in and out of the MegaMek game engine.

MekWars is the campaign wrapper program the wraps everything together. With the ability to be hosted and configured by anyone with the know-how and hardware, MekWars servers come and go, some, like MegaMekNET existing for over a decade. The server facilitates a long duration war that sees players across the globe fighting for their faction to rule the Inner Sphere.

The campaign engine keeps track of a player's Army and Resources as well as each Faction's holdings within a star Map of the Inner Sphere. The star map will guide factions as they fight for their objectives and eliminate their foes. MekWars also features a complex Production system that, with player contribution, builds new units to help replenish battlefield losses. This means that there are economic ramifications for losing certain planets that produce Meks or tanks.

The player's army within MekWars, which is tracked via the hangar, is where a player creates various armies to prepare for Battle against other opponents. With Army Composition rules met and Operation guides met, a battle will transfer to a dedicated MegaMek server.

The MegaMek server is almost identical to standalone MegaMek with some key differences, mainly dealing with the game start up. Armies are imported from MekWars into MegaMek, meaning that units are automatically brought in with proper weapons, pilots, experience/skills and even camo. Players will not be able to see each other's armies, either. Rules that were enforced on a MekWars server will apply here. For the most part, the battle itself will progress normally within MegaMek.

Following battle, the results are then exported automatically back to the MekWars server, which adds (or subtracts) the resources applicable, removes units that were destroyed and applies any changes to the campaign as a whole such as land exchange. The player is then responsible for repairing and reloading units/buying ammunition, replacing destroyed units and more.