I started on a hill while Jackal was on lower ground. That said, the hill was quite gradual and would not have been a problem for Jackal to scale it if he wanted and maintain full move mods. However, if he did that, i kind of would have been able to range him properly and do a lot of damage.

Therefore I elected to stay on the hill.

Jackal waffled at the edges of LRM medium range to try to get the most out his 3 gunner LRMs. Due to having a specialised close in brawler (HBK-4G) and a mid range brawler (HBK-4H), his lance did not have sufficient weight of long range fire to compete against mine, despite shooting on better numbers.

I also tried to keep my units not moving on the hilltop and in tight formation to have lower numbers generally and to have the biggest weight of medium range fire.

Jackal realised he couldn't keep up the exchange and decided to break off and go for a wide flank covered by trees.

Jackal pulled off the flank using a covered approach taking little to no damage. this was partly because I was repositioning my forces to intercept him along his new line of advance.

Wisely, his force was also led by the less valuable units, while keeping the critical brawlers hanging a bit further back.

By the time the two forces got stuck in, i had emptied the LRM ammo on the CRDs.

The basic engagement strategy was also to keep my units together, not moving if possible while using positioning to block Jackal from flanking or getting behind my force. As long as his force was generally in front of the CRDs I was happy to just sit and shoot.

Anyway, Jackal was really pounding me for about two turns. He had better to hit numbers owing to to levelled gunners, and was also rolling well. The AC20 was hitting as well, stripping a lot of armor off the CRDs but not doing any crits. Anyway, in the engagement, a CRD got hip crit.

I focused fire on the HBK-4G and finally took out the LT, silencing the AC20. meanwhile, Jackal had gotten HBK-4H into kick range of a damaged but camping CN9-AL. The HBK-4H landed the kick, but the return punch from the CN9 took off its already damaged head..

In the subsequent turns, Jackal made a mistake, confusing the mobile CRD with the hipped one. Thus he allowed the mobile CRD to get behind a HBK-4J into melee range. The HBK-4J fell to concentrated fire, and the CRD's kick took its head off on the ground.

We ended the test game at this point

2) I'd also be interested in knowing how threatening my army seemed from your POV
It was threatening because it had a 3 gunner AC20. AC20 is a weapon with a lot of 'skew' and can easily swing a game to the wielder's favour when the dice go well

3) finally after describing how the battle unfolded etc. now offer your thoughts on the relative balance of the matchup (feel free to add qualifiers–slightly very not at all etc.)
The unlevelled lance seemed to have a slight edge in my opinion, although Jackal was unlucky with the head kills. The edge probably was due to sheer volume of (less accurate) fire

So this was the matchup in this battle Pigeon was describing above. I played the Hunchback/Cent army. As you can see, the levels made these mechs all go up in BV by about 15.9% on average. 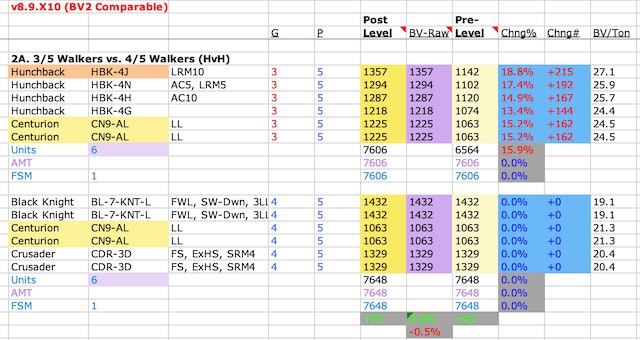 
A. Describe from your point of view how you think the battle unfolded
So here's the log I kept of the battle (I developed the template for this spreadsheet when I was doing tests against the bot). Note column marked Remain Margin, which is how much of each force is left in relative terms. 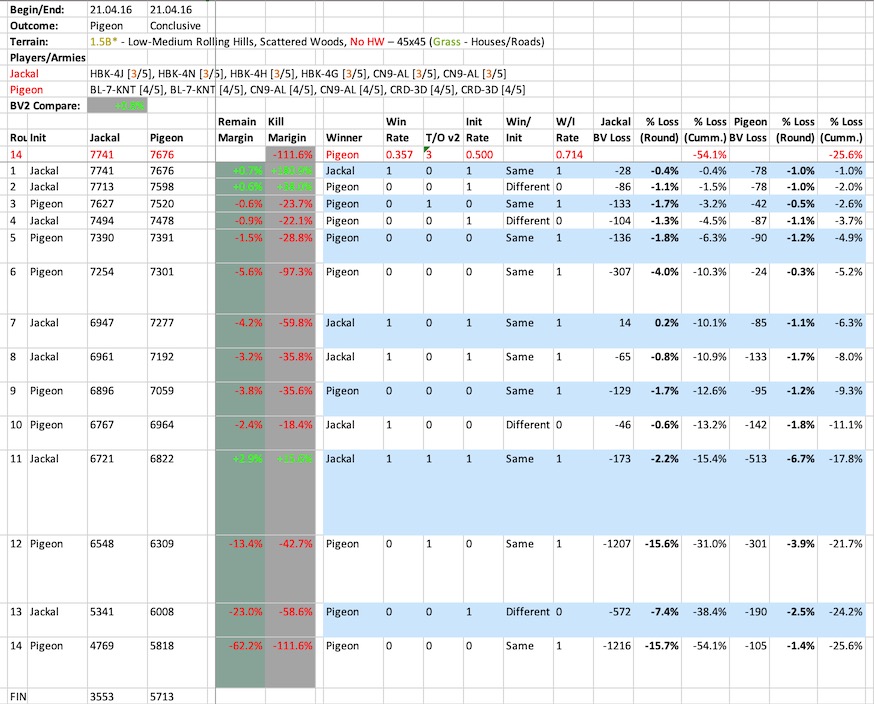 As you can see the battle was relatively close in rounds 1-11. Pigeon won most of the earlier rounds (when he was standing and delivering with LRMs), but starting round 7 (when I started moving up the hill), I was making a comeback and even pulled ahead on round 11.

Then on round 12, as I was now moving in for close combat, one of Pigeon's CN9-AL's got a lucky punch and destroyed the head on my HBK-4H—probably one of my best mechs.

Then on round 14, as Pigeon mentioned, I made a mistake thinking he had already moved a CRD-3D and left my HBK-4J's back open. He did enough damage to knock it down and then he kicked the head off, ending the battle.

B. How threatening did the opposing army seem from your POV?

Pigeon had some very solid mechs in this battle. They had a lot of firepower—both at long and short range—lots of armor, and low-vulnerability critical hit charts. Knowing that my own mechs has much less armor in comparison, I was concerned about rushing-in and letting him destroy my units one-by-one.


C. Finally after describing how the battle unfolded etc., offer your thoughts on the relative balance of the matchup

This was actually a really good battle and, as you saw in my round log, it was a close fight for several rounds. The head punch that killed the HBK-H was just bad luck. Had that not happened (and my dumb move with the HBK-J) I think this would have remained close.


Side Note: It's worth mentioning that I developed most of my BV-J models with TacOps Standing Still turned ON. I wonder if we had used it in this battle if the campers little less tough (I'm not looking to get into a debate about that rule though

We both start on opposing hills. I noted that the woods camps on both hills were between 19-21 hexes apart. So when i saw Jackal was going to camp, i proceeded to start camping as well. I don't usually play campy games, but in this case, with this lance composition, there weren't other better options.

Also, by camping at greater than 18 hexes, the black knights had to fire their PPCs at extreme range, hitting on 11, meaning I could effectively ignore them.

Unfortunately for me, Jackal is a pretty saavy player. He conserved his LRM ammo by firing only one LRM shot per CRD per turn. In addition, Jackal was rolling pretty well. Hitting more than half of his shots on 9s for a couple of turns.

I definitely got the short end of the stick in the long range exchange, with one of the CN9s being left with an open Left Torso (ammo torso).

However, i had damaged one of his black knights, having prioritised hurting them early so they would be easier to take down in the end game.

Jackal moved the other undamaged black knight up a flank to get closer in order to use its PPC. Anyway, I managed to knock the black knight down when it was midway between my lance and his. That was good enough for me and i got off my hill with all my units and charged in to try to finish it off.

As it advance, the HBK deathball managed to do good damage to the black knight. Jackal managed to extricate the black knight after moving a crusader in for support. I saw an opportunity at this point to move the deathball up the flank and roll up his lance from the side, targeting the left-most woods camping CN9

I managed to get stuck in on Jackal's left flank. and in the ensuing brawl, i badly damaged the CN9's Right Arm (upper and lower actuators destroyed by Ac20 hit) and took the torso off one of the CRDs.

In return i had the HBK-4H go down with 2 leg actuator hits, and the HBK-4G lost to an ammo explosion when a PPC shot penetrated its LT.

At this point it would seem that the advantage should firmly be Jackal's, but in reality, the game still felt quite even. Thats because Jackal's force was not kept close together. The two damaged black knights and the two CN9s were keeping a healthy distance from my HBK CN9 deathball. This meant that i was fighting only two CRDs with what was left of my lance. The black knights in particular were landing hits with their PPCs from a fire support position, but would probably have been more dangerous to the remnants of my lance had they been up close.

2) I'd also be interested in knowing how threatening my army seemed from your POV
Seemed threatening. More long range firepower, more armor.

3) finally after describing how the battle unfolded etc. now offer your thoughts on the relative balance of the matchup
The fight was fairly balanced, although i still give the advantage to the unlevelled walkers. I was only able to hang in there so long because Jackal didn't push when the advantage was his.

This could be an issue of composition since HBK's are primarily brawlers and the levelled lance consequently has inferior long range engagement ability, despite the better gunners

by Jackal
Here was the map from the battle that Obese Pigeon was describing in the above post (Pigeon force is blue, my force red): 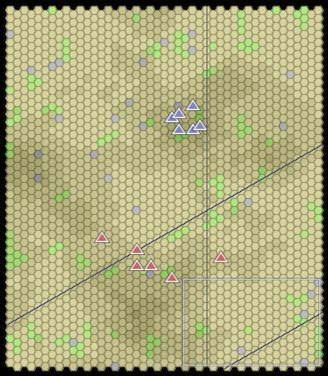 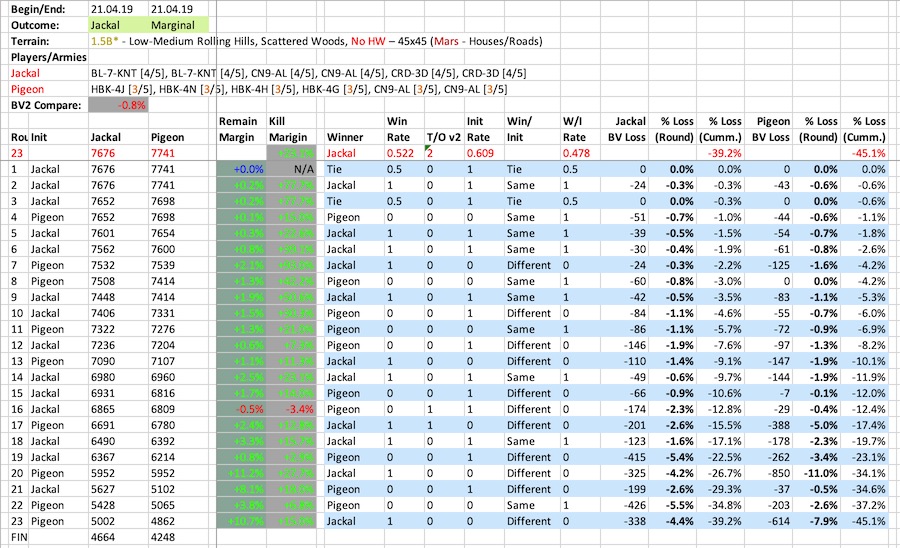 So the spreadsheet above is based on a template I developed for testing against the bot. At the beginning of each round I record the initiative winner and the BV for each army, the spreadsheet then spits out a bunch of statistics: Those then get processed into two stats: I developed this spreadsheet because I wanted to see if there were any stats that helped identify a close matchup other than just looking at battles won and lost (kind of like looking at sport stats to gain insights into different players and teams).

Over the hundreds of games I've tested, one thing I've determined to be a good indicator of an even matchup is the Win Rate. In a close matchup, on average, each side wins about half of the rounds. That sounds kind of obvious, but with the randomness of the Classic Battletech Game you wouldn't necessarily expect that.

Anyway, by that standard, my game with Obese Pigeon was VERY close. I won 52.2% of the rounds and, as you can see, the Remain Margin stayed within 2.5% for the first 17 rounds of the game. And, interestingly, even though I had destroyed 2 of Pigeon's mechs by the point we stopped, the game STILL felt even as most of my remaining mechs were badly beaten up.

Once again, BV-J seems to get this one right (or at least it gets it slightly better than BV2).


P.S. At some point I'd like to test Pigeon's thought that charging-in with the BL-7, CN9, CRD army in a tight "death ball" would be the most effective strategy. Sort of surprisingly, it seemed like I was doing best in the BV race when I kept my range, and my relative BV would always start dipping when I strayed too close (those massed 3/5 medium lasers are nasty). Anyway, I'm open minded about that. Will have to check that out sometime...

by obese pigeon
For melee testing, I suggest the melee lance should look something like this:
3*CGR-1A1 + MAD-3R, CRD-3R, PXH-1

Meanwhile, the control lance should be something like this:
3 other mechs + MAD-3R, CRD-3R, PXH-1

If you can get me the bvs of unlevelled mechs in BV-J I can help put in 3 suitable mechs.

The idea is that the test should be between two relatively balanced lances, one with a heavy melee element rather then pure melee vs pure range.