by Jackal
So this is an old bug that I forgot to report. Walking on the roof of a building costs the wrong amount of MP. In the example below, my mech was deployed on top of a level 3 building. 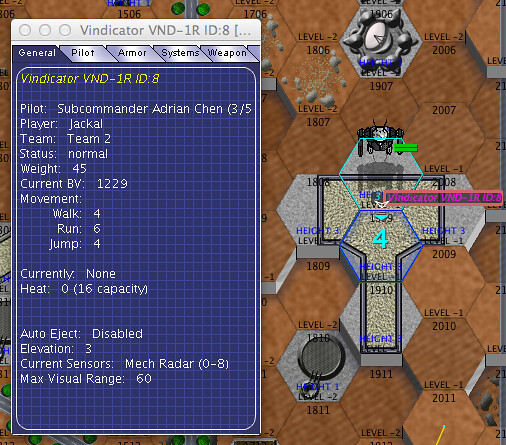 Walking forward on the roof of the same building should only cost 1 MP. Instead it's costing 4 MP which (just guessing) is probably the amount of MP required to *enter* a building. I tried toggling climb mode and go-thru mode and movement cost the same either way. I was able to jump off the building (which is what I ended up doing).

I actually ran into the same error once again today. This time I used climb mode to *go over* a level 1 building. Climbing up on the building should have cost 2 MP (1 MP for moving forward, 1 for MP for the level change), but instead it cost 4MP.

by arlith
Having a saved game for this would be immensely helpful.

by Jackal
Mekwars won't let you make a local save when you're playing double-blind. Is there a way to extract the autosave from the DED (not now, but in the future)?

Alternatively, I can probably reproduce the bug using MegaMek sans Mekwars, turning off the double-blind setting. Is that sufficient for your needs Arlith?

by arlith
You can create local saves as well. There's File>Game>Save Locally or something like that, that will create the saved game on the server, so you can still save (preventing you from saving with DB is designed to prevent cheating, as you could save it on your machine, open up a second copy as MM and load the save as your opponent, to see their units). There's also a way to tell the server to load a game. Right now it's only a "/" command, but you can type in something like "/localLoad <savedGame>" and the server will load that game. I suspect that this is somewhat of a hidden feature.

In any case, you can use the local save option to create an explicit save on the ded, and have someone else extract it later. Also, if you can reproduce the bug in MM outside of MekWars, that's perfectly fine too. In general, saved games save me the time of setting up the situation to reproduce the bug, and also help reduce miscommunication, and ensure that any required options to reproduce as properly set too.
All times are UTC+01:00
Page 1 of 1