Note: This thread will only be covering movement.

The first thing you need to know about AeroTech movement on this server is that it is not the same as with ground units. You do not move hex by hex, turning as need be. This server uses "vector movement." For the simplest description, as penned by Rushvin some years ago, it is like the arcade game Asteroids. You point your ship in a direction, fire your thrusters, and move. If you want to change directions you point your ship in a different direction, fire your thrusters, and move again. That is a bit of an oversimplification but it gives you a basic idea of how movement works. The big difference is that Aero battles still use a hex map and while your facing and thrust determine where you move you still move from hex to hex.

This is the simplest form of movement. You fire your thrusters and you move forward. 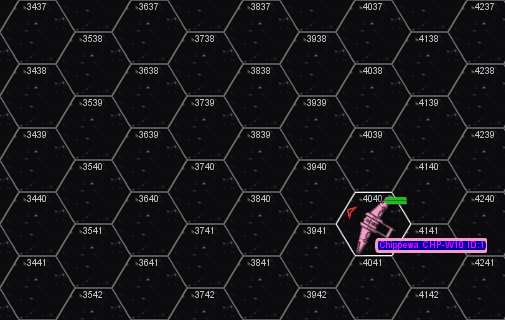 Here you are in your Chippewa and you want to move forward. Click on Thrust and you will see an arrow extend out from the front of your ship. This will point to the hex you will wind up in at the end of your turn. If you click Thrust once your speed is now 1. If you do nothing to change this you will move forward one hex every turn until you are destroyed or drift off the map. But, let us say you want to increase your speed to 5, which is your Safe movement speed for a Chippewa. Each click of the Thrust button uses one movement point. If you change your facing right or left it uses one movement point per hex facing, just like in BattleTech. 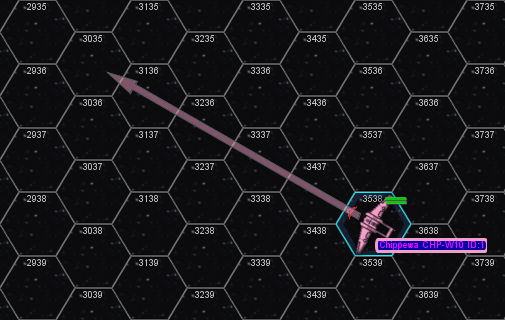 But say you wanted to turn your fighter and fly "North". (For simplicity I will refer to the top of the map as North and bottom as South.) This is where it can get a bit complicated. If you simply change your facing you will continue to move in the same direction but your ship will just be facing a different direction. If you change your facing one hex face to the right and apply thrust you will increase your speed and alter your course slightly. This is because when you apply thrust you are still heading somewhat in the same direction as you were before.

The key here is to turn your fighter two hex faces to the right and apply thrust. Now when you apply thrust it will be in a direction somewhat opposite to what it was.

Given that the safe speed of your Chippewa is only 5 it is best to change your course over two turns. You can do it in one turn using overthrust, but that leads to piloting checks and you can lose control of your fighter. If that happens then on the next turn you cannot change speed or facing. You can fire your weapons at a +2 penalty to hit. This lasts until your regain control of your fighter so it can last more than one turn. This can be dangerous as if they are close enough an enemy can maneuver in to point blank range and fire on your, or you might drift off the board. So for this fighter it is safest to do this over the course of two turns. Some fighters have higher speeds and can do this much quicker. Some units are slower and it may take longer.

You are now facing and heading North and and are one hex row over from where you started. Since this turn only cost you three movement points you could have continued the turn a bit more and wound up in the same row as when you started.

On your next turn this is what your fighter will look like on the map: 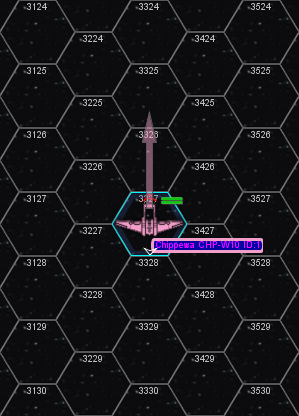 You can uses this maneuver to come to a complete stop but if you keep applying thrust you will start moving South. Please note that if you use Yaw more than once in a turn it forces a piloting check and if you fail you can lose control of your fighter.

One maneuver worth mentioning is the Roll maneuver. Basically this is simply flipping your fighter upside down (half an aileron roll for those familiar with flight maneuvers). Say you are heading North and an enemy fighter on your right side just shot up your right wing. If you roll your fighter you will now be upside down and your left wing will now be facing the enemy fighter on your right side. This is very useful for mitigating damage. The word "roll" will appear in your unit hex as an indicator that you have rolled your fighter. An Endover is a combination of a Yaw and a Roll. Like a Yaw maneuver it costs 2 movement points.

Speed can be your enemy just as much as your friend in AeroTech. In the middle of the map going fast is relatively safe as it can take several turns to come close to the edge of the map. But, if you are in a battle and take damage you might lost control of your fighter and spend a complete turn unable to turn or slow down. The closer you get to the edges of the map the more dangerous your speed can be. Going faster also means that when you make a turn it is generally in a wider arc. So pay close attention to your speed and only use your Overthrust sparingly. Generate too much thrust and you could lose control.

The best and safest way to get familiar with vector movement is to play against yourself. Fire up MegaMek locally on your computer (MegaMek.jar) and "Start A New Game." Select the Space map, select a unit, and select a starting location. Do not click Done. Next, fire up a second instance of MegaMek and "Connect to a Game." Pick another fighter, select a starting location, and then continue as you would any game on the server. For one of your sides deploy your fighter and then just ignore it. Do not move it. Do not fire its weapons. Just leave it alone. Focus all of your attention on the other fighter and practice moving. From your starting position pick a series of different hexes on the map then practice moving your fighter. The goal is to move through each hex in turn and eventually wind up in your staring hex facing your original direction and with your speed at 0.

Start small with a simple out and back. Head out in a straight line to a hex, turn around, go back to where you started. Then start adding randomly picked hexes. Do this multiple times and as you get more comfortable with movement practice skimming the edge of the map, meaning have one or more of your target hexes be along the edge of the map and come in at them from a close angle. And then practice again at higher speeds. Do not play against the Bot as the Aero Bot is not very good and has a tendency to fly its units right off the map thus ending the game.

A number of years ago Rushvin created several Aero Tutorials. They are worth checking out. Please note that server settings have changed since then and some rules aspects may be out of date. The first deals with Aero basics and the other deals with unit reviews.

There is an Aero 102 but it deals with ground attacks and atmospheric combat, which are at present not set up on this server.

This is a work in progress and in the near future I will be adding to this tutorial. In the meantime please feel free to ask questions. Please note that I am still a novice at AeroTech so this is just as much a learning opportunity for me as it is a teaching opportunity.
Top

A lot of effort put into this guide Mock26! And a really good attempt to address a difficult topic to teach. Good job!
Top
Post Reply
2 posts • Page 1 of 1